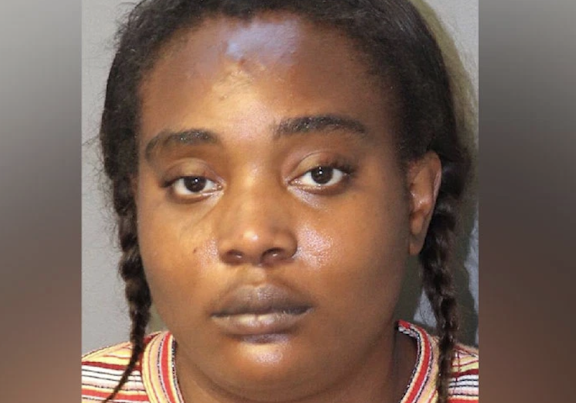 Maricia Bell, a 25-year-old Black woman was arrested Thursday for an alleged anti-Asian assault spree possibly driven by racist hatred. Bell is accused of attacking three women, ages 75, 63, and 34--and a 23-year-old Asian man in four separate attacks that took place over several months in the borough of Queens, NY.
In the first attack, Bell allegedly yelled “Why are you talking to me?” before punching the Asian man in a Flushing parking lot on Kissena Boulevard, cops said.

Bell allegedly committed a similar assault against the 34-year-old woman inside a Pomonok bodega at about 6:40 p.m. June 16, according to police. 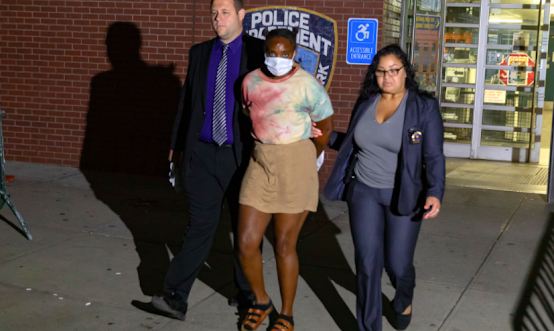 Then on July 11, at around 8 p.m., she is accused of punching the 63-year-old woman in the face as the victim was walking near 72nd Avenue and Parsons Boulevard, according to police. The woman was apparently minding her own business, not bothering anyone when Bell allegedly attacked her.

Now, in the latest incident that occurred last Wednesday, Bell allegedly hit the 75-year-old with a hammer. This attack occurred at 71st Avenue and Parsons Boulevard, near the previous random attack on unsuspecting Asians.
Bell was charged with assault, harassment and robbery, police said.

She has five prior arrests, sources said, including one on March 29 in which she was charged with assault as a hate crime.`
Why not consider subscribing to Brain Flushings and check out the ads on these pages. It costs nothing to subscribe and it's worth every penny. And remember, every ad you click on, you help in the fight against ignorance and evil.
Tweet
- July 25, 2021 No comments:


Vice President Kamala Harris' (D) approval rating has gone negative as measured in the recent Morning Consult-Politico poll released Wednesday. This comes after she made her perfunctory trip to the border, about 800 miles from the epicenter of the border crisis.

The poll results show that more Americans view the cackling leftist unfavorably than those who approve of whatever it is she is doing at her job.

A bare 45% of registered voters polled said they have a favorable view of Harris, while 47% said they have an unfavorable view of the Democrat, for a negative net rating of 2 percentage points. It's not known the percentages of Democrats vs. Republicans who populated the poll, but if he negative net rating was only 2 percent under water, it's likely that more Democrats were polled because normal folks know incompetence when they see it.

President Biden did much better than Harris in the poll, which indicates that voters who took the poll were primarily either Democrats or special needs voters, but I repeat myself. Biden is out to lunch--he's as sentient as a rock and anyone who would still vote for him, or view him favorably as president, is as bright as a black hole.
While 45% of registered voters said they have an unfavorable view of Biden, 52% [mostly leftists] said they have a favorable view of the president, for a positive net rating of 7 percentage points.

Harris has gotten toasted under the spotlight after Biden put her in charge of dealing with the increasing crisis at the southern border. Harris faced fierce criticism from the right after she made excuses for not visiting the border, and then, speaking through her nose, claimed that her visit to the border had been scheduled for a long, long time, as in dog time.

The newest poll found that Harris was slightly more favored by males hoping to score like Willie Brown, than by females and much more favored by young, low-information people than by older, informed people.
Why not consider subscribing to Brain Flushings and check out the ads on these pages. It costs nothing to subscribe and it's worth every penny. And remember, every ad you click on, you help in the fight against ignorance and evil.
Tweet
- July 24, 2021 No comments:

Algerian judoka Fethi Nourine and his frightened coach Amar Benikhlef refused to go up against a superior judoka from Israel and for that reason their Olympic accreditation was withdrawn on Saturday. They will be sent packing and leave in disgrace, but at least Nourine didn't have to face a Jew who was going to kick his ass and humiliate him.

The International Judo Federation’s (IJF) executive committee announced they had temporarily suspended cowards Nourine and Benikhlef. In response, the Algerian Olympic Committee withdrew their accreditation, and further sanctions are expected.

The IJF said Nourine’s stance was “in total opposition to the philosophy of the International Judo Federation.” But admittedly, their refusal was totally in line with some of the anti-Semitic teachings of the Qu'ran, aka: Islamic scripture.

“The IJF has a strict non-discrimination policy, promoting solidarity as a key principle, reinforced by the values of judo,” it added.

“Judo sport is based on a strong moral code, including respect and friendship, to foster solidarity and we will not tolerate any discrimination, as it goes against the core values and principles of our sport.”
But Algeria evidently sucks.

Two years ago, Nourine pulled out of the 2019 Judoka World Championships when his draw lined him up against Israeli Tohar Butbul, a much better opponent who would have easily won, it is believed by those who follow the sport.
When you think of Nourine's history, it makes sense that he is only pulling this stunt for publicity. As a ninth-ranked judoka, in the 73kg men's division, he would have been going up against a sixth-ranked Israeli named Butbul. And let's not kid ourselves, nobody beats a guy with a name like Butbul.

Butbul will now face Mohamed Abdalrasool of Sudan in his first fight.
Why not consider subscribing to Brain Flushings and check out the ads on these pages. It costs nothing to subscribe and it's worth every penny. And remember, every ad you click on, you help in the fight against ignorance and evil.
Tweet
- July 24, 2021 No comments:

Biden, as sharp at a cue ball

President Biden appeared on the Comedy News Network in a town hall hosted by the semi-talented Don Lemon. While you can tell that he did his best to cover for Biden, he couldn't do so at times without interrupting him, so he let the president ramble on.
Lemon to President Biden: "Let me ask. Let me ask, let me follow up on her [a woman asking Biden at the town hall] question and ask you when will children under 12 be able to get vaccinated?"
Biden's answer was deep:

"Soon, I believe. Now look, one of the things that I committed to do when I got elected, I said ... The answer, soon in the sense that I do not tell any scientists what they should do, I do not interfere. And so, they are doing, they’re doing the examinations now, the testing now and making the decision now. When they are ready, when they’ve done all the scientific need be done to determine children at ages 3, 4, 5, 6, 7, and 8, they, in fact, are, all have different makeups, they’re developing, they’re trying to figure out whether or not there’s a vaccination that would affect one child with, that’s at such and such an age and not another child."
Seriously, this is verbatim and if this doesn't get you to be concerned, you may be a Russian or China operative.

This is the President of the United States talking here. Talking gibberish. Talking word salad.
If he finishes out his first term, it would be, now look, c'mon man, You know. . . That.
Why not consider subscribing to Brain Flushings and check out the ads on these pages. It costs nothing to subscribe and it's worth every penny. And remember, every ad you click on, you help in the fight against ignorance and evil.
Tweet
- July 24, 2021 No comments: 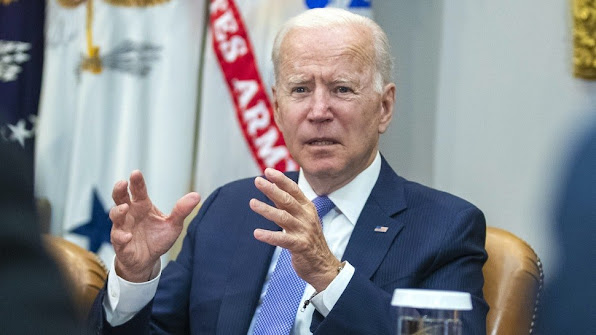 Rep. Dr. Ronny Jackson (R-TX), a former White House physician who served both Presidents Barack Hussein Obama and Donald J. Trump, told the media that he believes President Bien will be forced to resign or face the 25th Amendment due his his lack of fitness for the office of the president.
The fact that Biden cannot string two consecutive sentences together and tends to be as confused as his hand signer when he speaks gibberish, may have been the giveaway. C'mon man, the guy needs Cliff Notes to know where he's speaking from, and even when he reads the Teleprompter, he screws it up.
Jackson, who now represents Texas’ 13th Congressional District, told Fox News that he has been saying for a while that “something’s going on here.”
“And I’ve been saying that it’s only going to get worse, and guess what? We’re watching that happen right before our eyes right now,” Jackson said. “And I’m at the point right now where, you know, I went from, you know, telling people, we should be concerned about what might potentially be going on, to now saying, hey, what is happening right now?”

“Where are the people in our academic medicine that were out there calling for President Trump to have a cognitive test? Where are these people?” Jackson asked. “There’s something seriously going on with this man right now. And you know, I think that he’s either gonna, he’s either gonna resign, they’re going to convince him to resign from office at some point in the near future for medical issues, or they’re going to have to use the 25th Amendment to get rid of this man right now. There’s some serious stuff going on right now.”
Jackson said that members of Biden’s cabinet are likely looking at Biden and wondering if he is able to effectively carry out his duties as President of the United States. Jackson added that “this is a national security issue at this point … it really is.”

Rep. Ronny Jackson (R-TX), a former White House doctor for Trump and Obama, says he thinks that Biden is going to be forced to resign or will be forced out with the 25th Amendment. pic.twitter.com/NG9j3ZzJXP

— (((Jason Rantz))) on KTTH Radio (@jasonrantz)
Let's not kid ourselves; it's so obvious even the White House toilet cleaner noticed something ain't right with Joe.
Why not consider subscribing to Brain Flushings and check out the ads on these pages. It costs nothing to subscribe and it's worth every penny. And remember, every ad you click on, you help in the fight against ignorance and evil.
Tweet
- July 23, 2021 No comments:

Welcome to my blog. Here you will find information that is both interesting and useless. You can even see how Steve, my camera, sees the world through my eyes, or get your hands on my latest novel, Jihad Joe at:

Thanks for visiting. Hope you enjoyed the coffee and cake. Sorry we ran out of donuts.

Some of my favorite sites